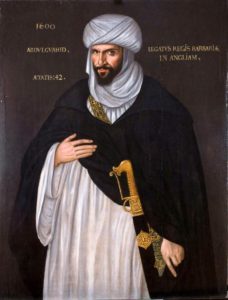 Once I decided that Will would fall in love with the Muslim Ambassador from Morocco, I went searching for images about him and I immediately found the one of Abdul Guahid that was painted in 1600, when he came to London to meet with Queen Elizabeth I.

It is not known who painted or commissioned the portrait.

Abdul Guahid was one of the first Muslim diplomats to be granted an audience with the Queen at Court.

He and his entourage were paraded through the streets, and greeted with cheers as well as scorn and fear.

What the public didn’t know was that the Ambassador arrived on a secret mission: to persuade England to join Morocco in a military alliance against Spain.

Why was his hand painted in this position?

Was someone trying to convey a message of doom?

The portrait now hangs in the Shakespeare Institute in Stratford-upon-Avon, the town of Shakespeare’s birth and death.

Ostensibly, the portrait is there because some scholars believe Abdul Guahid was the model for the Moorish general, Othello, an hypothesis persuasively refuted by the brilliant scholar Dr. Sophie Bostock. (See video below.)

Nevertheless, it is fitting that Abdul Guahid and Shakespeare are joined together in death.