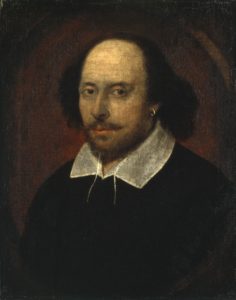 When I was researching Swagger, I read that the painting that probably most closely captured Shakespeare’s likeness is the one known as the Chandos portrait (c. 1600-1610) because it was painted in his lifetime.

I love the fact that he sports a boho earring.  That’s why I have Will say at the very opening of Swagger, “Why do [the other portraits] keep leaving out the earring?”

In addition to the portrait, I’ve included a Guardian article that argues that why this portrait is the only “true” likeness of Shakespeare.