Falling in Love with Shakespeare 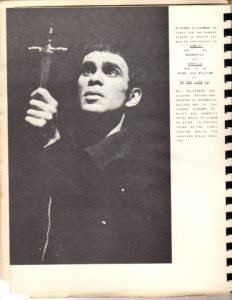 I first learned to love William Shakespeare when, at nine years old, I played a page boy in a local repertory company production of Hamlet in my hometown of Cincinnati, Ohio.

For three weeks of rehearsals I heard the language of the play every night.  It woke up something inside me that I can’t explain.  I was spellbound by the richness, the majesty, even the words I didn’t know.

I remember my mom wore her Audrey Hepburn black sheath with a discreet brooch.

The critics were scattered in the packed house. 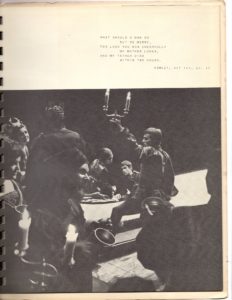 The climax came when Hamlet has the play performed, which lets Claudius know he’s onto him.  Claudius shouted, “Give me some light!” and I hustled out on stage holding a gold filigree candelabra all lit up.

Then, at the end of the play, it was time for the curtain calls.

We were all supposed to gather onstage, bow once, and then quickly leave so that the young actor playing Hamlet could take his bows solo.

But I was so entranced by all the applause that, even though everyone else left the stage, I stayed on with Hamlet.

Bowing and bowing right alongside him.

Afterwards, the director said he wanted to fire me.

But years later I realize I was given a gift: learning not to be afraid of Shakespeare, and in fact to love an author who could create a grieving prince, a ghost of a beloved father, a villainous king, and a young woman who goes “mad.”

My parents, who were both passionate about the bard, and had named me after their professor at Columbia, Shakespeare scholar Mark Van Doren, encouraged my love of this revolutionary, infinitely fascinating, intriguingly human playwright.

In fact, after my acting gig in Hamlet, I decided there needed to be a musical version of Hamlet for kids.  (I had chutzpah even then!)

To this day, I remember my mom typing out the script while I dictated lines for “my” version of the play.

She took me seriously, and it’s a memory I will always cherish.