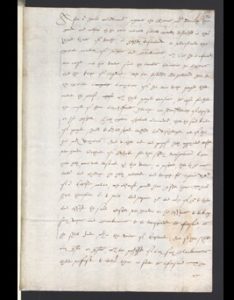 While doing historical research for the Swagger, I was shocked to learn that the arrival of the Muslim delegation from Morocco in 1600 led to a rise of xenophobia in Elizabethan England.

In fact, soon after they left, it appears that Secretary of State Robert Cecil created a draft proclamation to deport “Negroes” and “blackamoors” (as Muslims were referred to) from the country.

According to the British Library, this effort depicted Muslim “infidels” as “draining resources needed by the Queen’s ‘own natural subjects.'”

It’s not clear if this draft was ever officially distributed.

An earlier demand, from 1596, also sought to remove “Blackamoores.”

Though it was distributed, the masters of these Muslim workers refused to “consent to the deal.”

As it depicts these issues in Elizabethan England, Swagger speaks to our own times about the rising tide of xenophobia and the debate over the deportation of Muslims.